For the past thee months, the Northwest and Southwest regions of Cameroon have been cut off from the Internet, after the government abruptly ordered Internet Service Providers to cut off access for those regions on January 17. Everyone living in those regions – roughly 3.5 million people – have not been able to use the Internet since. It’s only today, after 93 days of a near complete Internet black-out in the anglophone regions of Cameroon, that connectivity has been restored.

Why? The government says it is because “fake news” was creating security concerns. But really, it was because a growing protest movement in the English-speaking half of the mostly French-speaking country was becoming increasingly powerful political force.

The Republic of Cameroon is a West African nation of 22 million and ruled by autocrat Paul Biya since 1982–the second longest serving head of government in the world. Biya is a francophone, as is most of his base of support. The parts of the country that were cut off from the Internet for the past three months were majority english speaking. But now, events of the last 6 months betray the deep divisions which effectively partition the nation into two distinct entities -not just anglophone and francophone, but those with Internet, and those without.

Behind this drastic move by the government lies a long, complex history of post-colonial social, political and economic construction. Today’s Republic of Cameroon is actually the amalgamation of two colonial states, the former French-ruled East Cameroon, which gained independence in 1960, and the British-ruled West Cameroon, which in turn became independent in 1961, following a UN plebiscite which also saw the two Cameroons join as a two-state federation, the Federal Republic of Cameroon.

In 1972, fears of Nigerian interference in Western Cameroon led the government to organize a constitutional referendum which dissolved the two-state federation and established the United Republic of Cameroon. As a result, with a majority francophone, pro-French central government, anglophone Western Cameroonians lost key elements of their autonomy negotiated a decade earlier when the two-state federation was founded. The United Republic of Cameroon underwent one more name change in 1984, when  then – and current –  President Paul Biya unilaterally renamed the country to the Republic of Cameroon.

The seeds of resentment in anglophone parts of the country were sown during these initial post-colonial years, and the recent decision to deprive millions of people from accessing the Internet was a direct consequence of the growing resistance to the erosion of anglophone rights in the country. 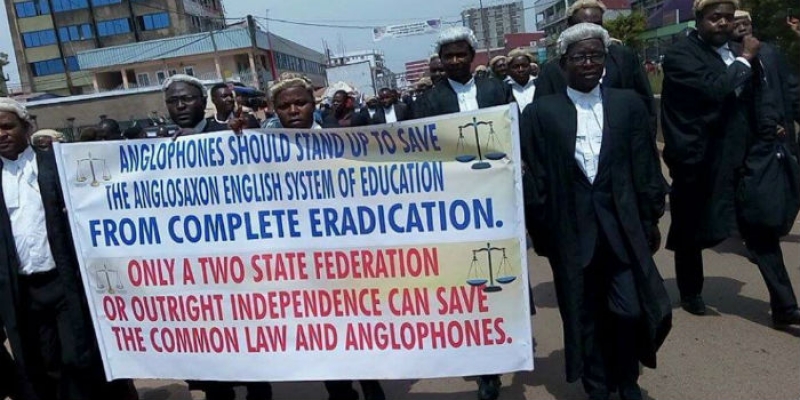 Indeed, in late 2016, lawyers, teachers and students began taking to the streets and organizing to negotiate for better protection of English-language rights, claiming that French was being imposed as the lingua franca in their classrooms and courtrooms. Protesters have been denouncing the government’s response, accusing them of beatings, killings and kidnappings. Two key pressure groups, Southern Cameroons National Council and the Cameroon Anglophone Civil Society Consortium, which were seeking to negotiate with the government, were banned at the same time as the Internet was cut off in January, and two leaders of the Consortium Barrister Nkongho Felix Agbor and Dr. Fontem A. Neba, were arrested and are being held in the capital.

While it’s difficult to ascertain the degree to which the government attempted to repress the organized effort to defend anglophone rights, it is clear that the perceived threat to the status quo was compelling enough to take the extreme measure of cutting off the Internet to English-speaking parts of the country. The government is justifying its decision by explaining that the proliferation of “fake news” was creating national security issues. It’s unclear exactly what “fake news” the government was worried about, and whether the measure has quelled the spread of misinformation. However, what is very clear is that anglophone Cameroonians were deprived of their means of communication – banks, hospitals, universities and businesses all suffered from this lack of connectivity, as did millions of people who found themselves cut off from the rest of the world.

Cameroonians keep receiving these text messages from the Ministry of Posts & Telecoms on our repressive laws. #BringBackOurInternetpic.twitter.com/GDnssmDBEl

It took 3 months for the government to reinstate the Internet to anglophone Cameroon. This is a welcome development, and Cameroonians who were affected by the black out are certainly relieved, but the issues that led to this extreme measure have not been dealt with. The colonial legacy in Cameroon, with biased and uneven power and social structures, has not gone away. Now that connectivity is restored for anglophones, how will protesters and activists react and respond? The next few days and weeks will be critical, as anglophone Cameroonians are able to pick up their fight where they left off.

You can keep track of what’s happening in Cameroon by following the #bringbackourinternet hashtag on Twitter. For a long-read on what life was like for Cameroonians who have been cut off, check out this essay by Monique Kwachou, who works at the University of Buea, one of the largest universities in anglophone Cameroon.