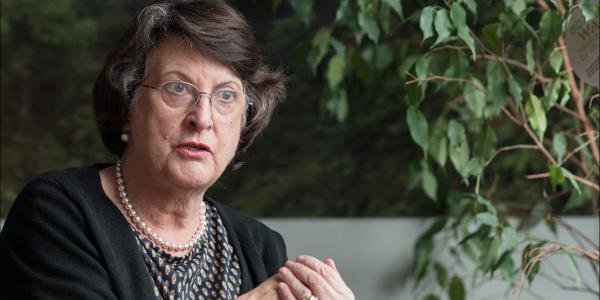 Wildlife trafficking is the world’s fourth largest criminal activity with rhino horn now being worth more than gold. On Monday 21 November MEPs debate a report calling for common sanction at EU levels to help fight wildlife tracking and vote on it the following day. We talked to report author Catherine Bearder, a UK member of the ALDE group, about wildlife trafficking and what is fuelling demand for it.

Where does your engagement against wildlife trafficking come from?

I first went to Africa in 1974 when I married a zoologist. We could even see then that the natural world was under pressure from humans. People were saying: “I just want to take one animal because we want to do research on it” or “I want the skin”. We could see the damage in the little reserve that we were in, but, the more you find out, the more you discover. My husband is now a professor of primatology in Oxford and has taught hundreds of students about the conservation of primates.

What really got me into politics is my concern about what we are doing to the planet. We know about climate change, but the loss of biodiversity is equally serious. The trade in wild animals and plants is enormous: It is now considered the fourth largest criminal activity on the planet, after drugs, guns and human trafficking. But there is a real fudge between what is legal and what is illegal. Things are gathered illegally and then come in through the supply chain: Wild animals are coming into the pet trade, the fashion industry and the food industry. But the most valuable is ivory and rhino horn.

Are there cases of consumers buying illegal products without knowing it?

Absolutely. Many of the pets which are said to be bred, come in reality from the wild. The pet trade in fish, for example, is enormous. But it is very difficult to trace them back. Other examples are furs or shark fins, bluefin tuna getting in the food chain and at the very high end rhino horn, pangolins for Chinese medicine and ivory for trinkets. Do we really need trinkets made from the most iconic animal in Africa? Every fifteen minutes an elephant is killed.

Is the situation getting worse?

The rarer something becomes, the more valuable it becomes and the more people want it.

What are the causes of wildlife trafficking? Who is behind this business and why is it so successful?

The causes are market demand, but sometimes it is also a lack of understanding of the buyer. There is a lot of money to be made. There are criminal gangs. It is easier to move ivory and rhino horn than drugs. Ivory is worth more than platinum. As someone once told me in Cameroon, “You open the back of the truck and you do not know whether you have got children in there, drugs, guns or ivory.”

It is the same gangs, it is the same roots. They will send ivory to China, coming back from China will be drugs or guns. This is why I feel so passionately that Europe should be doing something about this and the whole European Union needs to act together. That is why I have called for the same sort of penalties right across Europe. You need Europol to treat this as a serious organised crime which it does not currently have the mandate for.

Two years ago I set up the cross-party group “MEPs For Wildlife” working with the Commission and asking for an EU action plan. We were very pleased when it came forward but new additions were needed. That is what my report is focusing on.

Which other actions should be taken?

There should be a wildlife trafficking coordinator to ensure that action is taken by the member states. Another legislative measure to take is what they call the Lacey Act in the US which says that if something has been obtained illegally from the wild, then it is illegal in its destination country too and penalties are taken.

Is time running out?

The pressures on the ecosystems are enormous. There is criminal activity, which we can do something about, and then there is human pressure, which is much harder to tackle.

People need more space, including for farming, so there is less space for wildlife. The climate is also changing: fish are moving because the waters are warming, birds are migrating to different places, yet there are fewer and fewer places for them to go. Without biodiversity, life is not possible. We are all interlinked.

The report by Catherine Bearder sets out Parliament’s response to the EU Action Plan against Wildlife Trafficking presented by the European Commission.